It was a weekend of ups and downs for Solarmax Technology sponsored rider, Jason Aguilar, at Pittsburgh International Race Complex. Friday’s practice saw Jason get off to a decent start. Jason ended the first practice session in 3rd place, and improved to 2nd place in the final practice session. Saturday morning Qualifying was going well, but when Jason came in for a suspension adjustment and headed back out to get a couple of fast qualifying laps in, a red flag came out and the session ended early. Unfortunately, that left Jason in 3rd Place in qualifying for Supersport 600.

In Race 1, Jason got a good start and moved into 2nd place on Lap 1. Jason was stalking the leader, but on lap 8 of the 16 lap race, he hit the curb in the chicane causing a big highside crash. Jason got back on the bike, but lost about 45 seconds in the process. Jason put his head down and went to work trying to salvage as many points as possible. By lap 10, Jason was going faster than all the other Superstock 600 competitors. On lap 11, Jason set a new class lap record of 1:45.732. The following lap, he broke that record with a 1:45.679. Making up several positions, Jason finished in 6th place, earning 10 points. The crash resulted in Jason’s Championship points lead being reduced to only 8 points. 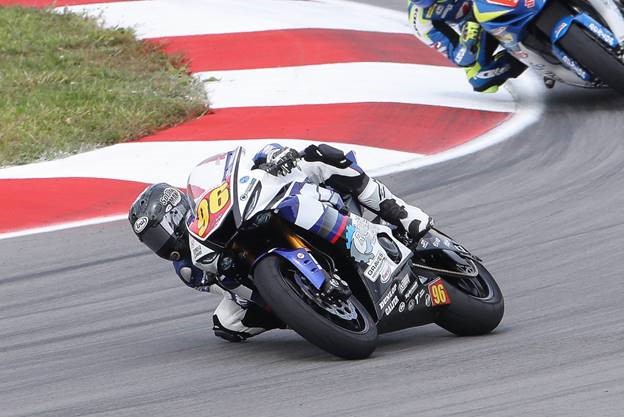 Jason was really sore Sunday after the crash in Race 1. However, Jason was determined to get some points back in Race 2. He got a good start, but so did his competitors, leaving him in 3rd place right behind his main rival in the Championship. He could not afford to let his points lead shrink anymore, so he waited a few laps, made the pass on lap 5, and set his sights on the race leader. Jason also had to work his way around some of the Supersport riders to get to the leader. Jason got behind the leader and waited for an opportunity. With 4 laps to go, Jason grabbed the lead and held on for a hard-earned win. The win extended Jason’s Superstock 600 Championship Points lead to 17 points.

Jason Aguilar: “I didn’t see the curb in the chicane as I was focused on getting around a Supersport rider. When I hit the curb, it launched me into a huge highside. I ran after the bike, and all I could think about was getting back as many points as possible. I had so much adrenaline that I didn’t even feel the weight of the bike when I picked it up. The first lap back was kind of an inventory of bent parts and checking to make sure nothing was broken or leaking. Then I just started clicking off fast laps and setting my sights on any rider ahead of me. I was glad to get some valuable points back and not lose the Championship points lead. Having set the track record for my class after crashing, I knew I had the pace to battle for the win and get some points back in Race 2. I talked to my crew, and told them I was going to try to get behind the leader and then make a move for the lead with 4 laps to go, and that is exactly how it played out. Thank you to Solarmax Technology for all your support!”